Multiculturalism has long been one of the right’s favorite slurs. It covers so much ground! In one word, conservative culture warriors get to thumb their noses at liberal academic elites and put down minorities. A classic “win-win.” This approach is not new to the Trump crowd. Moderate and establishment Republicans have been doing it for decades.

Multiculturalism is not some wild academic fantasy about how we could be a wonderful Kumbya signing country of all races and creeds. Nor is it an insidious plan to make white people feel guilty and convince them to give up Christianity, Confederate monuments, and whatever the hell else conservatives think makes people “white.” It is about accepting that in a multi-ethnic state people will have both shared and separate cultural behaviors and norms. Rather than pretend that we are all assimilated into a single culture (the melting pot analogy), people who support the notion of multiculturalism suggest that all of our diversity ads to the richness of our cultural mosaic (or to continue the food analogy, our separate cultures interact like the ingredients in a salad).

Conservatives have been bemoaning “leftist” academia for poisoning the minds of the youth with stuff like multiculturalism for most of the last half-century. In a nutshell, the narrative is that once upon a time history and literature curriculum were “pure.” They concentrated on the facts and focused on the great men and works of western civilization. These courses immersed young people and immigrants in the “real” American culture. When schools were like this they were good, students learned a lot, and America had one happy, unified culture. Schools today do not teach students to love America and western values. They use subversive books that included (unnecessary) voices, like those of slaves, women, and immigrants. They don’t read the “classics.” And students are not as smart or well educated as they were before.

This narrative is pure fantasy. My second masters’ thesis and dissertation both tackle these topics. Given how narrow this field is (the history of history education), I can safely claim to be an expert on the subject. History as a professional teaching field in the United States dates back to the mid-19th century. What passed for history instruction in these days was not a list of kings, battles, and important men that made the “west” or the United States but instead was about how conflicts, trade, and cultural exchange created change over time. They stressed a more holistic, global approach to the subject– where early courses concentrated on the rise of civilizations around the world (asking questions like “what were the necessary traits and geographic preconditions”), narrowing to the regions and states the early United States inherited their political, economic, and religious culture from, to the development of our young nation. White, female, Christian women dominated the curriculum development, teacher training, and classroom instruction up through WWI and the narrative they promoted was one part “civilizing mission” and one part a course in cultural pluralism (God’s wonderful diversity). This 19th-century civilizing mission in the schools was not just for non-white peoples– indeed, many of these Christian women openly stated the dire need for civilizing white frontiers people through the twin pillars of Protestant Christianity and pluralistic democratic government.

Don’t worry, it is totally not racist (or ahistorical) to claim superiority of western civilization! I mean, it only ignores the stability, technological, and economic advantages that China held over the west for thousands of years. Nor does it reconcile with how deeply connected Western cultures were with the Islamic world during the pivotal “Renaissance” period. And don’t worry about all that geography stuff that explains how Europeans conquered two continents full of people (but also don’t say they intentionally committed genocide). The confusing, nonsensical position of Western Civilization advocates on the right. Note: White Supremacists LOVE this narrative. But it is definitely not racist…

In fact, if you asked a professional historian or history teacher in 1900 how they teach “Western Civilization” they would have stared at you blankly– such courses didn’t exist (and the topic would have sounded silly and ahistorical to most of them). It was the result of officers training schools and higher education coming together to devise a course that could explain to Americans why fighting a “World War” in Europe was necessary. That’s right, the notion of western civilization– you know, the narrative of individualism, exceptionalism, Protestant Christianity, and democracy from Plato to NATO — that you hold near and dear to your heart was in large part the creation of a government propaganda program! Historians very quickly abandoned this narrative. The emergence of the United States as a global superpower in the 1950s brought an increased focus on global affairs, slowly but inexorably shifting college and high school curriculum from a western civ to a world history model. By the late 90s and early 00s this was basically a fait accompli. The Western Civ course has been largely discarded, having long since outlived its utility.

The narrative is silly in a lot of other obvious ways too. There is no such thing as a classic text. None of the “classics” were considered classics in the 19th or early 20th century (many hadn’t been written yet). In fact, critics of the public schools and higher education in the late 19th century bemoaned the fall of Latin and Greek in the schools as a dumbing down of the curriculum that undermined the traditional values of education being replaced by dubious works of American and English literature. Likewise, critics complained about the shifting focus of history. How could textbooks dedicate so much time to more current and parochial conflicts like the American Civil War while glossing over Napoleon? Why is Theodore Roosevelt getting more coverage than Martin Van Buren? Every generation complains that the books they read and the history they concentrated on isn’t being covered in the same way. This is inevitable and proper. History and literature are relevant in how they connect to our current world. As it changes (and our research on various areas improves) so too does our curriculum. 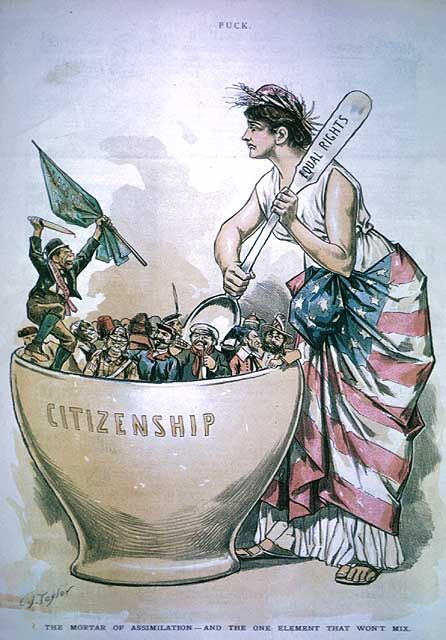 Those pesky Irish, monkeying around and refusing to assimilate like the “good” foreigners.”

The conflict between “melting pot” and “salad bowl” represents this well. The melting pot myth was never accurate. Slavery is the easiest way to debunk it.  Slaves were never assimilated. Nor was there a serious attempt to (indeed, it was illegal to teach many of the necessary “melting pot” skills or knowledge to slaves). Freedmen were treated in much the same way. To believe in the melting pot is to ignore the existence of black Americans.

But it isn’t just black Americans who have been left out of the melting pot. The United States has a long and disgusting history of discrimination against Asian people– especially the Chinese. Native Americans were alternately in and out, depending on the region, time, religious/political goals, and tribal conflicts. And plenty of “white” Americans have been excluded at varying times. It doesn’t matter if you are German, Irish, Italian, Greek, Polish, Jewish, or Russian, at some point you or your ancestors were not part of the mainstream. Each of these ethnic groups maintains aspects of their culture and adopts pieces from others. This isn’t some academic fantasy– it is a blatant, real-world fact that each of us interacts with on a daily basis.

Go grab a slice of pizza. That isn’t Italian food. It is Italian-American (and sometimes something else altogether). Sit down at a Tex-Mex and tell me who that belongs to. Every popular modern music genre is blended and borrowed from a variety of cultures. These things were not melted into an existing white, Protestant, male world. They coexist, interact, and sometimes intermingle. And yes, sometimes they come into conflict. They always have.

This quote from David Brooks in the New York Times illustrates how deeply confused conservatives are on the topic:

This is the nonsense that the moderate/establishment right has to get over. Multiculturalism as an academic term might be part of the “theology of the educated class,” but it is also a historical fact of life in this country. Trump is using the notion that multiculturalism=elitist egghead nonsense as a dog whistle. Conservatives, like Brooks, might not always blow this exact whistle, but they have used multiculturalism as a cudgel with which to beat academia for decades. Blaming the anti-intellectualism that Trump taps into on the educated elites for fighting back is rich. This is a platform the right has tried to tie to the left for years. Now that their own elites have been lumped in things are going south! Who could have predicted that a bigger fraud would turn our own con against us??!

Multiculturalists understand that the United States is a nation made up of people from all over the world. We know that each of us individually has a unique experience and that most of us live in more than one culture. We believe that our differences are important and that ultimately they are net positives. They are the things that make us greater than the sum of our parts. Interacting in a multicultural world requires respect for differences and empathy for others. These are not liberal or educated elitist ideals. They are notions that most Americans agree with. Using multiculturalism as a slur against educated elites and minorities simply denies reality while sowing the seeds of dissension. The key to overcoming Trump’s bigotry and healing a divided nation isn’t for the educated elite to abandon ideas like multiculturalism. Instead, we need to come together, right and left, to combat the anti-intellectual climate that we’ve created.

One thought on “The Right’s Problem with Multiculturalism (and History)”