Hillary Clinton made big news twice this weekend. Both highlight the hypocrisy of the press and the dismal state of political dialog in this nation.

We’ll begin with the more frivolous of the two stories. Hillary Clinton was sick. Outside. In public. At a hot, humid memorial and tribute to the victims and survivors of 9/11. The media jumped all over this story. Journalists that I respect a great deal defended their frenzy– she is a 68-year-old woman running for President of the United States! Her health matters. Of course, they ignored the context of these stories coming on the heels of a host of conservative conspiracy theory websites and tabloids publishing claims that Clinton is gravely ill. By reporting the story in a straight-forward fashion these journalists perpetuated the narrative, lending credence to it in the minds of our uninformed and increasingly paranoid public. All the while, candidate Trump continues along with little commentary regarding his health, despite having only produced a doctors note that looks like something a child would have written and forged a signature on when signing up for something at school. Thus, Hillary Clinton is hiding something more serious behind her disclosure of “pneumonia” and Donald Trump is the transparent picture of health– he’d “be the healthiest individual ever elected to the presidency.” 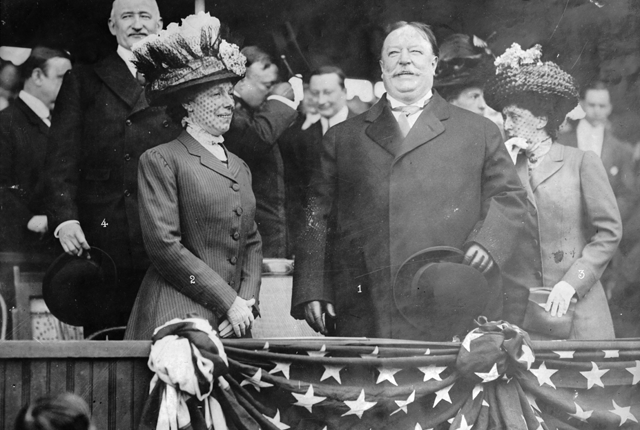 William Howard Taft , widely remembered as our “fattest” President, still might have been healthier than Donald Trump.

Outside of William Howard Taft and Ronald Reagan, I have a hard time thinking of a single other President that Donald Trump would likely be more fit than. I can definitely imagine him doing something stupid like not wearing weather appropriate clothing to his inauguration in order to look manly, getting pneumonia, and then being killed by his quack physicians. So he might be AS fit as William Henry Harrison. He is certainly not as healthy as the two younger, more physically active men who have most recently held the post. And we have no way of knowing if he is more or less healthy than his opponent, since Trump has disclosed nothing about his health.

Such is the state of political reporting in the 21st century.

More seriously, Hillary Clinton made some off the cuff remarks this weekend in which she referred to half of Donald Trump’s supporters as deplorable:

To just be grossly generalistic,” said Clinton, “you could put half of Trump’s supporters into what I call the basket of deplorables. Right? The racist, sexist, homophobic, xenophobic, Islamophobic—you name it. And unfortunately there are people like that. And he has lifted them up.

But the other basket—and I know this because I see friends from all over America here … but that other basket are people who feel that the government has let them down, the economy has let them down, nobody cares about them, nobody worries about what happens to their lives and their futures—they’re just desperate for change. Those are people we have to understand and empathize with as well.

This caused an uproar. The political media pounced, suggesting this may be Clinton’s “47%” moment. The problem with this commentary, beyond how the context of it ignores how silly this looks compared to say Donald Trump’s “Mexicans are Rapists” slogan, is that it wasn’t made glibly. Hillary Clinton is right to claim that a large number of Trump supporters are bigots (and no, calling a bigot a bigot is not textbook bigotry– learn to read, please). The question is not if Clinton was wrong to say this– he is openly supported by white supremacists. The question is did she overstate it. Put more bluntly, are half of Donald Trump’s supporters some combination of racist, sexist, homophobic, xenophobic, or Islamophobic?

The answer, unsurprisingly, is yes.

A Public Policy Polling survey shows 59 percent of those who said they viewed Trump favorably think Obama was not born in the United States and only 13 percent believe he’s a Christian.

Trump supporters have negative feelings towards most groups of people (particularly non-whites), with the exception of the police and white people.

Over 30% of Trump voters think blacks are inherently less intelligent than whites. 40% think that blacks are lazier than whites (clearly none of them have walked through the nearly all white offices I have worked in as an employee and consultant– if work got done in these places it wasn’t for more than a few minutes a day). Roughly 45% thought blacks were more rude than whites and more prone to criminal behavior. And roughly 50% believe that blacks are more violent than whites. 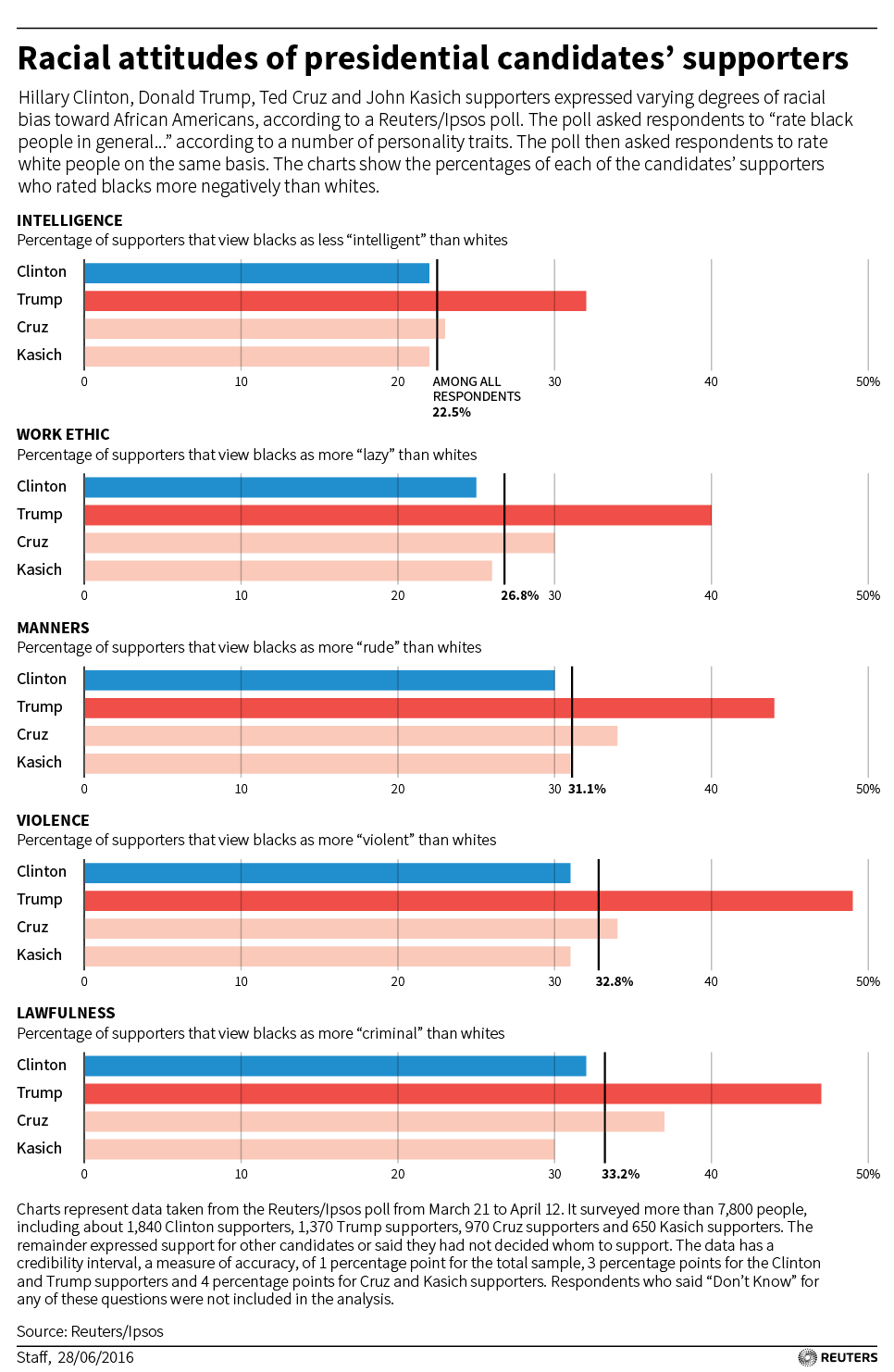 These attitudes on race and religion are the tip of the iceberg. Go look into their attitudes towards women and homosexuals. 50% is probably underestimating the number.

There is no getting around this. Trump’s views are deplorable. But as we all know, Trump really does not have views. He simply reflects back whatever it is his audience wants to hear. The consensus views of his voters are bigoted. This is not speculation. This is not twisting the figures. It is a fact. And not a surprising one either. The GOP has grown openly more committed to white grievance politics since the mid-1990s. This leap simply took their simmering racist, sexist, homophobic, religious bigotry out of the darkness.

Any political commentator lamenting Clinton’s “gaffe” or insinuating that this is some grievous insult is engaging in some kind of absurdist criticism theater. We didn’t blast Mitt Romney for labelling the 47% as takers because it was mean (it was). We gave him hell because it was untrue. Obama paid no real price for saying Republicans clutch their guns and bibles– most of the ones I know wore that as a badge of honor. Because it was true. So too is this. Over half of Donald Trump’s most devoted supporters hold bigoted views. They tell us that themselves in polls, in signs, and in voting actions. They cheer wildly at his bigoted statements. They openly pine for an America where they didn’t have to share rights (or space) with these people.

Clinton wasn’t wrong. These people are deplorable. And there is nothing we can do to win them over or to govern responsibly with them. Everything they want runs counter to the freedom and rights outlined in our Constitution. The more important part of her speech was in the subsequent paragraph, which has gotten little to no traction in the press. There are many Americans out there who feel afraid and lost today. Empathizing with their plight, helping them see things are not as horrible as they seem, and finding a way forward for them that doesn’t involve subverting democracy or oppressing others is the task at hand. These are people worthy of our time and conversation.

As to those in the basket of deplorables, we have no choice but to call them what they are. The failure to do so in the media and popular culture is part of a long-standing aversion to confronting ugly truths about the American people. We are comfortable calling Bull Connor a racist, but shy away from saying it about the people who voted for him. Look at the way people tip-toe around describing “Sherrif Joe” Arpaio in Arizona. The man is an unrepentant racist. And so are the people who gleefully vote him into office and ignore his flagrant disregard for the US and Arizona constitutions in the name of pursuing illegal immigrants. Like all government servants, these men represent the people who elected them. Their voters are every bit as racist, sexist, homophobic, Islamaphobic or generally bigoted as the office holders themselves are.

The shame reflects an ugly and lethal trend in this country’s history—an ever-present impulse to ignore and minimize racism, an aversion to calling it by its name. For nearly a century and a half, this country deluded itself into thinking that its greatest calamity, the Civil War, had nothing to do with one of its greatest sins, enslavement. It deluded itself in this manner despite available evidence to the contrary. Lynchings, pogroms, and plunder proceeded from this fiction. Writers, journalists, and educators embroidered a national lie, and thus a safe space for the violent tempers of those who needed to be white was preserved.

Some Americans are bigots– and it crosses the political spectrum. But the people who are voting for Donald Trump are uniquely bigoted. They hate more people for more reasons and by larger percentages than any candidate in our recent past. Trump’s craven opportunism is deplorable. His voters overwhelmingly bigoted views are deplorable. But the media members who are treating this as some great misstatement are the most deplorable of all. They are the creators and cultivators of this great racist safe-space. They built the basket that lifted the deplorables out of the shadows of the deepest, darkest recesses of our nation and thrust them into the light of our national discourse on the state of the nation and the direction we take in the future. And rather than point out that these horrible figures are running loose in the nation, they prefer to sit back and feign offense that anyone would dare suggest what history has long shown to be true: that a large number of Americans are openly bigoted. And that most of white America is content to look the other way.

Call it unwise (it wasn’t). Criticize the manner in which she said it. But recognize the fact that it is true.