Hate is not a new look for America. It has been with us from the beginning. The European settlers who colonized this land did so with faith in their heads and malice in their hearts. Christian warriors took these lands through tricks, coercion, deal-making, and force– all decidedly Non-Christian acts. It was okay, though. You see, God had provided this land for them to set up their communities in.

In some places, hate would manifest itself in the form of racial chattel slavery. Owning other people is fine, though– we are bringing them salvation through the Lord! These poor wretches would have never known the love of Jesus if we had not snatched them from the Dark Continent and shown them the one true way (while stealing their labor and beating, raping, and murdering them).

Hate let us promote a caste system in America where blacks are not equal to whites in legal, economic, or political terms. Hate let people in this country discriminate against homosexuals– the shooting in Orlando is but the most recent and horrifying example. Hate convinced people in this country to kill millions of people in Asia to “stop communism.” Hate convinced people to fly planes into buildings, explode truck bombs, shoot up schools and churches, and murder men and women in cold blood for standing up for their rights as humans. Hate led a man to arm himself to the teeth so that he could execute patrons of a gay nightclub.

Hate is not the sole province of one group. Indeed, there is plenty of hate to go around. Pat Robertson, a supposed Christian religious leader can show us how it is done.

Homosexuals are a “favored” group of the “left.” Muslims are too. And Muslims hate homosexuals. Liberals can’t explain it– they are painted in by their PC notions of racism. But Donald Trump is enjoying a victory! Obama is whipping the waves and doesn’t understand that “radical Islam” is Islam and that we can only win by destroying all Islamic states and peoples. (I have no idea what his non-sequitur about an Arab soldier being possibly sexually assaulted by a homosexual Shiek is about)

How many people does Pat hate here? His open contempt for the left couldn’t be clearer. Robertson is gleeful in his absurd notion that the left is painted into a corner on this issue– as though the strawman liberal he has built is real. There is nothing confusing about how liberals in America refuse to paint all Muslims with the brush of terrorism and our support of LGBTQ rights. It comes from the same place: a belief that people have the right to live in peace and in accordance to their own conception of the good life up until the point that their conception intersects with another group’s. This is liberal citizenship 101.

He also hates homosexuals– he has made this clear on many previous occasions– and is violently opposed to granting them rights or space in American society. Behind wanting women to know their place as subordinate to men, this might be his favorite topic. Finally, Pat Robertson hates the Islamic religion. It is a religion of hate– see, it is in the Koran! Of course, the Bible is filled with awful stuff too. Indeed, Pat Robertson frequently talks about the ways God has used violence to cleanse the Earth– from stonings to genocide. Not surprisingly, this disctinction is lost on old Pat.

What could be more Christian than to root for people to kill each other? And what an ingenious way to draw a distinction between Islam and Christianity!

Hate does not belong to the rich and powerful. Hate can come from the bottom of society too. Earlier this week a hateful and small-minded woman went on an extended rant about the evils of homosexuality in the comments section of a wedding photo of two wonderful women I know. 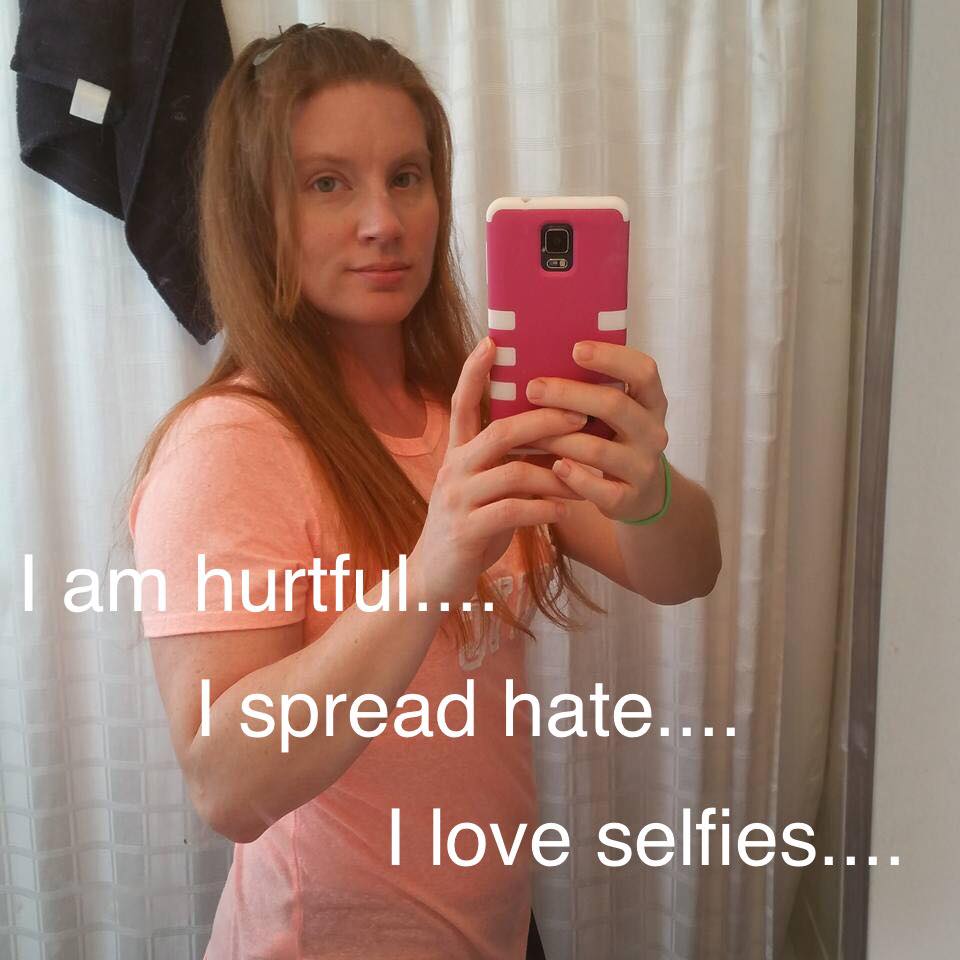 She really does love selfies.

This charmer engaged in all sorts of brilliant hate speech. She blamed gays for the destruction of America. She expressed outrage over their “nasty” lifestyle. She asked how they could explain two men kissing to their children (as though that is hard to wrap one’s mind around) and accused them of destroying their children’s chances for a “normal” life. I’ll assume that her idea of normal is being in your late thirties and taking lots of tacky bathroom selfies like an overgrown teenager. Eventually, she got around to this gem: 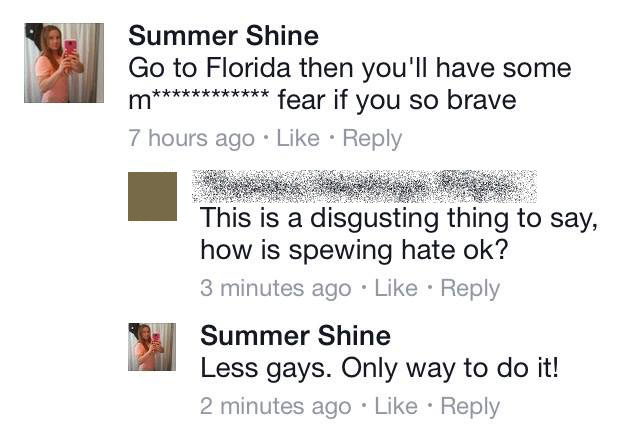 This is the logical conclusion of hate. People that are deviant from your norm must be purged. The message is the same, whether it is being spoken by an Islamic terrorist, a bigoted old evangelical Christian leader, or some white trash on the streets of Cleveland.

And it is wrong.

That wrongness runs deep. The wrongness morally and ethically is so obvious that it seems silly to point out. But given how many religious people can’t grasp this simple fact– including many that I love– I guess that we must be that explicit. Every time you engage in a discussion about the unnatural behavior and subsequent immorality of LGBTQ lives you are pushing yourself and others down a path of hate. The slope isn’t slippery– it is a fucking cliff dive. You are saying that their identity is sinful and must be expunged. You might tell me you are hating the sin, but loving the sinner. This is not true. You are hating the sin and telling the “sinner” that something they have no control over is causing you to hate them. In asking them to “change” you are asking them to stop existing as the person they are. You are, in no uncertain terms, calling for their death.

And in case the point is still not clear to you, wanting people to die is wrong.

I don’t know what it will take to convince the people that we have a big problem with hate and violence in this country. I gave up on that when we barely blinked at the murder of scores of children at Sandy Hook. But I do know that turning a blind eye to the hate spewed in my own communities and faith will not move the ball forward. I will not allow people to pretend that these events are isolated or the actions of a single, hateful religion. It was in Dylan Roof. It was in Seung-Hui Cho. It is in Pat Robertson. It is in “Summer Shine.” It is in Donald Trump. This hate is in us all.

I won’t pretend that I have special insight as to the desires of God. But I refuse to believe in a creator who is more obsessed with where we put our genitals than what is in our hearts. And if that is the sort of God you walk away from your holy scripture with I’d say you are reading it wrong– akin to thinking the Great Gatsby is a story about the dangers of automobiles. Muslim, Christian, atheist, it doesn’t matter. If hate is what drives you, then something is seriously wrong with you. It is up to those of us not driven by hate to stand up to them. To call them on their bigotry, misogyny, homophobia, racism, and religious persecution. To demand an end to violence and to be willing to compel them when reason fails. This isn’t done through calling it by a certain name, such as “radical Islam” or by pretending that who the victims are has nothing to do with the crime perpetrated against them. It sure as hell is not done by hoping that everyone you disagree with simply kill each other off. It can only be accomplished through a systematic rejection of the doctrine of hate.

It will be difficult. It starts with tough conversations with friends and family. Those little moments of hate that you let slide in the name of positive relationships. Those confrontations over the clear and apparent hate in their faith or beliefs. It will inevitably include conflict with leaders in your church, schools, jobs, and government. Doing so will cost you socially. It will strain and ruin relationships. It will be uncomfortable. But what is your discomfort compared to the suffering that millions (if not billions) of people around the world feel as the result of hate emanating from people who hold some sort of political, economic, or physical power over them? Hate does not end when one side “wins” and vanquishes their foe– alliances fracture and new foes always emerge. Hate ends when people take action to stop it from festering and growing in their communities. We all have to do our part.