Thanks a lot for stopping by. My friends in the industry appreciate your business and understand that putting up with your leering and flirting– right or wrong– are part of the job. But it would sure be nice if you could act like a human once in awhile. 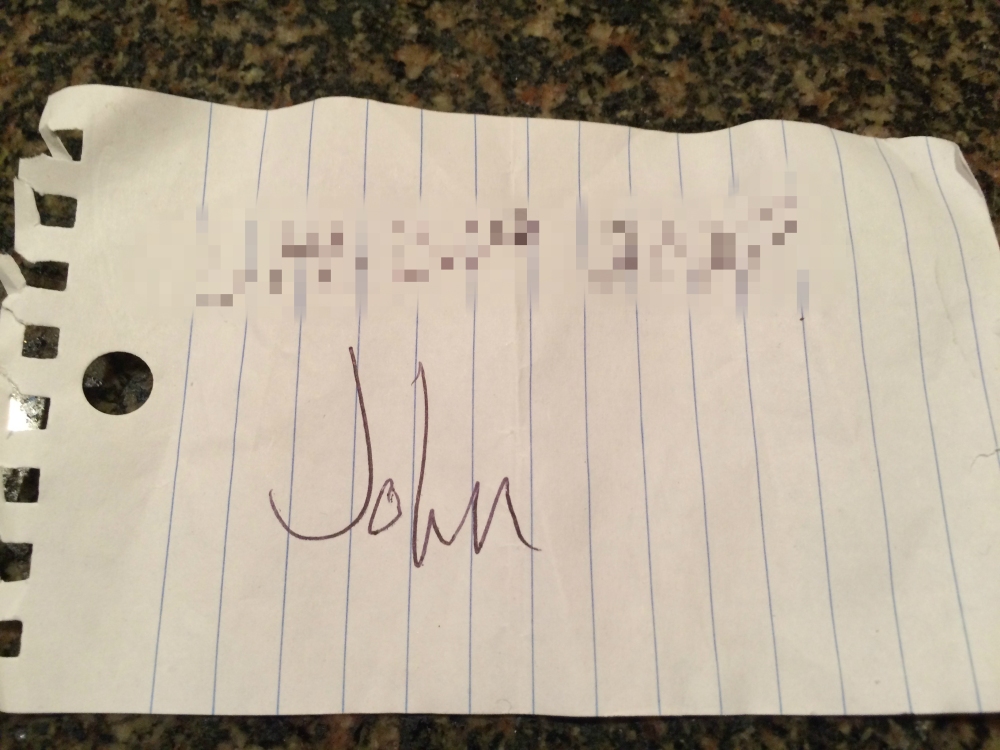 For instance, say you are a guy named John and you specifically come in every shift your favorite bartender works. And you ALWAYS leave her your phone number. If she never calls you after pulling this for weeks it is probably safe to assume that she is not interested. A normal human would show some dignity and move on. You gave it the old college try and no one has been harmed.

But that is not you, is it John?

No, you have to make a scene. Screaming “What am I to you?!!!” was a great start. Storming off and stiffing the staff when you were politely told you were one of her favorite customers was really classy. Way to show her what a great guy she was missing out on. And the rest of the customers really appreciated having their evening disrupted by your childish outburst. Thanks a lot for that.

Here is some helpful advice to you as you search for a new place to harass women half your age. Bartenders work in the “service industry.” Their job requires being pleasant to you, serving you the food and drinks you order, and cultivating an inviting atmosphere. Yes, this means she smiles at you, laughs at your bad jokes, and nods her head when you tell her an oh-so-interesting (and definitely true) story about your fascinating and very important work. Her income literally depends on it. Do not mistake that with “she is totally into me.”

Service staff are people. They work. They date. Sometimes there is overlap between these things. I’ve got friends and family who married their bartender crush. Landing one works a lot like dating any other person. Start with not being a douch-canoe. Be polite. Tip well. Be interesting and authentic. Are you not interesting when you are authentic? Go spend some time becoming a real person– who the hell would want to hang out around you? Have fun and be social. Make friends. Cultivate real human relationships. Do not develop unhealthy attachments to people you have no relationship with. Don’t be creepy.

Just in case that last line is a little too vague for you, here is a short primer I wrote last year that can help explain why you are creepy and how you can avoid being so in the future.

1) Understand that other people do not exist for your pleasure/amusement/desire/use.

That cute girl reading a book at a coffee shop, walking her dog, talking with her friends, or working behind the bar was not placed in this time and space just so she could meet you. Instead, she is a human being who went out into public to enjoy a caffeinated beverage and a good read, to exercise with her dog, to socialize with her friends, or TO WORK HER FUCKING JOB. You are not the reason she is there. If your interactions with her ignore this context and simply make her the object of your desire you are being creepy. Stop doing that.

2) Do you whine that “nice guys finish last,” “girls don’t like good guys like us,” or “they always friendzone us good guys”? That is creep speak.

You are not a good guy, you are a piece of crap. Women don’t dislike you because you are nice. Mostly because you are not. You don’t view women as full people– they are simply an object of sexual desire to you. You are pouting that you do not get what you want (sex) from your “relationships” with women. You fail to understand that you are unsuccessful at cultivating romantic relationships because you treat women like potential sexual partners instead of treating them like they are people. And remember that treating people nice isn’t some grand fucking accomplishment– it is literally the baseline for being someone other people like. You don’t get a trophy for this.

3) Don’t ignore that other people have agency.

Don’t get upset when someone does not play the role you assigned them. I know you think you have scripted the perfect conversation for this moment, but real life is all about improv and your fellow actors and actresses have agency in this dialog. Not having “done anything wrong” does not entitle you to a favorable response. You are dehumanizing others by assigning them a role in your fantasy. Remember that you are not the main character in everyone else’s life story. Sometimes you are simply an unnamed background character. Play the role that fits your situation.

4) You don’t get to define other people’s comfort level.

So you have been as charming, witty, and urbane as you possibly can be and you still came off as creepy to someone else? That sucks, but it is going to happen sometimes. While you are throwing yourself a pity party, remember how much it sucks for the person who was creeped out by you. Feeling unsettled and uncomfortable (if not downright unsafe) is a pretty unhappy feeling. It is not like they went into this exchange looking to be creeped out. Not everyone is going to like you, and some people might outright be uncomfortable in your presence.

5) Follow the “Do not stare; do not touch; do not crowd; do not corner” social rules

Seriously, if you do any of these things to people you are a creep. Knock it off.

6) If you have a “goal” for your social interactions with women you are a creep.

Hitting the bars looking to get laid? Creep. Going to a party at your friends place with the mindset that you are going to hook up with one of his wife’s friends? Creep. Having dinner with a mixed group of friends and hoping one of the women there will want to come home with you? Creep. Guys who do this are generally violating all of the rules I listed above. Stop making social moments into sexual moments.

Cliff notes version: Treat women like people and no one will think you are a creep.

And seriously, John, if you come back and harass my friend again being rejected is going to be the least of your concerns.

One thought on “To the creepy regular at the bar…”